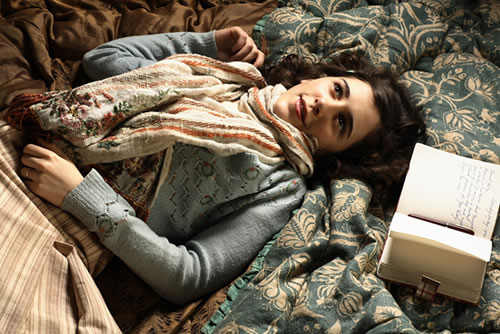 The BBC now has a transmission date for my adaptation of “The Diary of Anne Frank” – early January next year. It’ll run throughout the week, in five half-hour episodes. As you know from my past postings it’s been an extraordinary journey, a very emotional adventure, to bring it to the screen.

This is Ellie Kendrick, who plays Anne with great sensitivity and humour – she really is a teenager for our times, as well as those terrible ones, and I think young people from all over the world will identify with her. If you miss it there’s a dvd being released later in January, and I’ve also written a diary about it for the “Mail on Sunday”. And I’m doing work with the Anne Frank Trust, which brings Anne’s message into schools and prisons – a message of tolerance, and respect for minorities, and an end to blind and bigoted violence.

I’ll be speaking about this, and my adaptation of “Pride and Prejudice”, at the Foyle Film Festival in Londonderry at the end of November, and also in various schools and libraries this autumn and at the Cairo Literary Festival, in Egypt, in January.

The film of “These Foolish Things” seems to be going ahead, touch wood, and should start shooting in India in the new year. It’s based on my novel about outsourcing the elderly to Bangalore. Have a look at the novel bit of my website to see why I think it might be a great idea. In fact I think I’ll be the first to sign up.

As for other projects: I’m starting work for the BBC on a drama set in the Crimean War, featuring Florence Nightingale, Mary Seacole ( the black doctress who ran the British Hotel at the front) and the celebrity chef Alexis Soyer. All three were mavericks, extraordinary characters, who in their own ways fought against the system in this most surreal and insane of wars and I’m trying to knit their stories together. My Shakespearean rom-com “Romeo and Juliet” seems to be chuntering along, as is my adaptation of “A Little Princess”.

Hopefully my bio-pic about Vera Lynn will also be developed. And there’s hopes for a TV film of my novel “Driving in the Dark”, about a coach driver who travels across England tracking down the son he has never known, the result of a one-night stand twelve years earlier. No new news about “Tulip Fever”, the movie, but yet again it feels uncomfortably topical, what with the economy crashing around us…they experienced it all before, in Holland in 1636, but then it was tulips that brought the country to collapse.

As I write this I’m looking out of the window and watching the squirrels dig up all my tulip bulbs. Maybe they hope to squirrel them away until the prices rise…stupid little buggers. Have a great autumn and do email me if you fancy at info@deborahmoggach.com