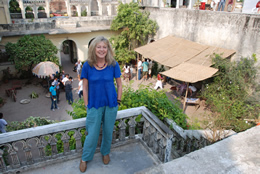 Just back from visiting the set of “These Foolish Things”, now known as “The Best Exotic Marigold Hotel”, in the middle of the Rajasthan countryside. An hour of bouncing along rural roads, empty but for the occasional bullock, and suddenly there ahead of us, through the thorn bushes, glimmered a sea of cars, trailers, vast catering tents and a great crowd of extras, sweltering in the noonday sun…camel extras, cow extras, beggar extras, to whom I nearly gave some money until I realized they were part of the movie. What was real and what was fake? For in the middle of nowhere Alan, the art director, had built a teeming Indian market complete with laden stalls, tribal stallholders swatting flies, and even the onligatory spiders webs of tangled telephone wires with kites trapped in them. … and a tarmac road, freshly-laid then scattered with dust and rubbish. And there, in the middle, was the Marigold Hotel. This is a real building, an old haveli built around a courtyard which tourists use as a riding hotel, and which had been given a wonderfully dilapidated makeover. There weren’t enough bedrooms for our characters so two rooms had been built on the roof, which the owners like so much they’re going to keep. I can imagine some guest in the future leaning against the wall and finding, as it collapses, that it’s only made of plywood.

Sitting on a row of chairs, resting between takes, was our cast, each backed by a man holding an umbrella. A dream cast if ever there was one…Judi Dench, Maggie Smith, Bill Nighy, Celia Imrie, Ronald Pickup, Tom Wilkinson, Penelope Wilton, Dev Patel (star of “Slumdog Millionaire”)…they’d already been filming there for three weeks and become very fond of their retirement home with its dusty pot plants and rooms full of photos of their fictional past. In a few days they would be off to Jaipur, to film in the much more difficult conditions of teeming city streets, but just now this was an oasis of calm and good spirits, the Indian and British crews working under the director, John Madden, who is unfailingly cheerful and much loved for his courtesy to everyone, from the lowliest tea-boy to the starriest Dame. Here are some pictures from the set, taken by my companion Mark Williams, which give you some idea of it all – the cast in the courtyard, me talking to extras, the amazingly real bazaar and so on….