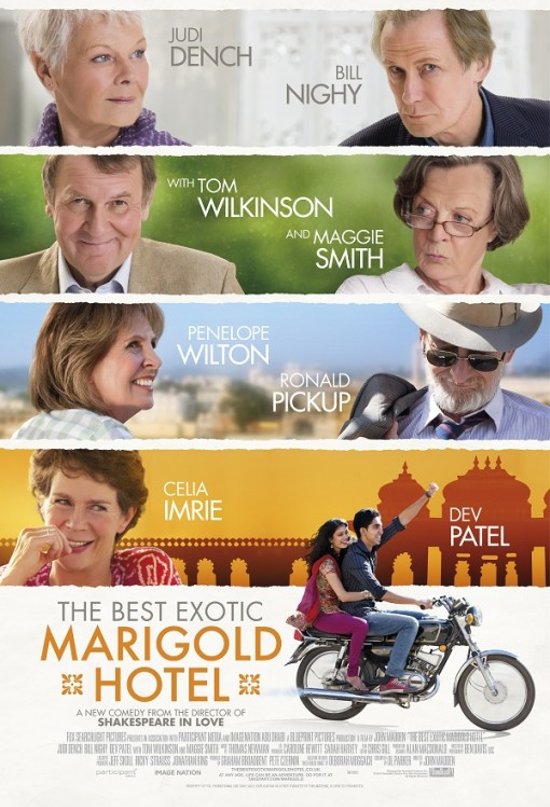 Things are hotting up with the film of “The Best Exotic Marigold Hotel”, which is due to be released on 24 February. It’s rather a thrill to see the ads on buses, and trailers in the cinema. It was even more interesting to read an article in “The Independent” which said the outsourcing the elderly to the developing world is actually starting to happen, with retirement homes for British pensioners springing up in various countries – not just India but, for instance, the Philipines. How strange it is, that an idea that started as fiction is actually a business proposition.  In fact I’ve always felt that novelists and entrepreneurial whizz-kids have something in common – they have lateral minds that jump sideways. The difference being tht most novelists aren’t handy with a spread-sheet.  In fact many novelists I know shove their bank statements, with a shudder, behind the sofa.

The premiere of the film was a hoot. It was at the Curzon Mayfair and the adjoining street was closed off with a red carpet and great arches of marigolds. When I arrived the photographers were all shouting “Deb, Deb!” I flashed them a smile and posed, only to realize they were actually shouting “Dev, Dev!” for our young star, Dev Patel. Who cares? I posed anyway, see picture.

After all, they wouldn’t be there if it wasn’t for my book.

By the way, the novel has been reissued with a movie tie-in cover – it’s no longer “These Foolish Things” but, of course, “The Best Exotic Marigold Hotel”. The inside remains the same, except they’ve changed the name of the hotel from Dunroamin.

Celia Imrie arrived, in sub-zero temperature, wearing a sari. She posed for the paps before sticking on a helmet, jumping on a motorbike and whizzing off to the Old Vic, where she was appearing in “Noises Off”, a show which had been put back half an hour for her to do the red carpet appearance. After acting in it she whizzed back for the post-premiere party.  What a sport.

I particularly loved our post-party goody-bags, which contained a copy of my novel, a bag of marigold seeds printed with the movie poster, a tube of anti-ageing cream, a £20 voucher for East and a packet of Hob-Nobs (which Maggie Smith’s character eats) and a Hob Nob mug.

I’m doing various Q&As after screenings of the film – at the Notting Hill Gate Cinema and the Clapham Picturehouse on 26 Feb, at the Everyman, also in London, on 28 Feb and at the Warwick Arts Centre on 16 March.

By the way, those of you with sharp eyes might spot Penelope Wilton’s character, Jean, reading a copy of “Tulip Fever”…

And, continuing the hotel theme, I have just finished my novel “Heartbreak Hotel” which will be published early next year. It’s about a sozzled old actor who sets up Course for Divorces in a ramshackle hotel, this time however in Wales. Colder and wetter, but on the other hand nearer, than India.

Do email me if you fancy at info@deborahmoggach.com…