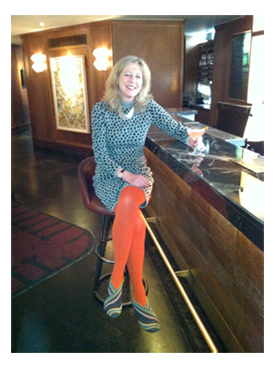 The Hay Festival was a hoot. Suddenly the sun came out, the town was heaving with people and 1200 of them came to my event, which Peter Florence chaired with his usual style. It was even televised by Sky Arts. Afterwards most people queueing for books wanted to know where I got my shoes (United Nude, since you ask) so I drew little shoes on their copies of the novel…and outside, our Buffy lookalike – the exuberant Ian Marchant – handed out samplers of Heartbreak Hotel and schmoozed the crowd. He’d even grown a beard which he’d darkened with his wife’s mascara. I don’t think anyone had a clue who he was supposed to be, but who cares.

I’m talking about “Heartbreak Hotel” at various other venues – Althrop, Buxton, Edinburgh, Winchester, Wimbledon amongst them (see the list elsewhere on the website). What’s going to be interesting is doing some of the events with my daughter Lottie, whose novel “Kiss Me First” is published in July. There’s already a lot of chatter about it on the internet, clocks ticking, all sorts of stuff, and a head of steam is building up. Soon I’ll just be known as Lottie Moggach’s mother, which is fine by me. We’re doing our first joint gig at Ways with Words at Dartington on July 9th.. I’m deeply proud of her but it will be rather strange, sitting there together.

These are the shoes, by the way. Surprisingly comfortable.

I’m also busy adapting Heartbreak Hotel for the BBC. They want a 6 part series, each episode featuring one of the courses, and I’m starting with Basic Car Maintenance, taught by Nolan, the ravishing Welshman. It’s fun to do but I’m shifting the story around and even the characters are subtly altering as they move out of the novel and become creatures of drama.